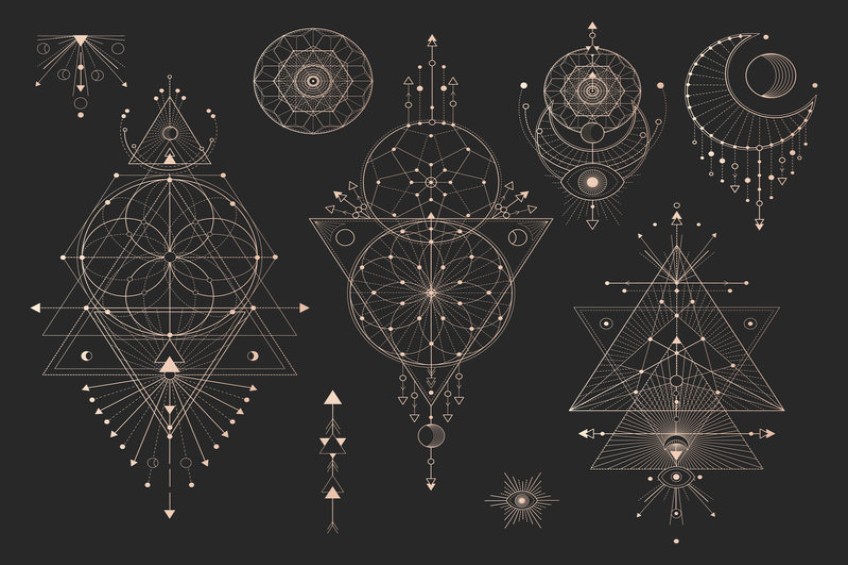 What are Alchemy Symbols and how are they related to Astrology elements?

The ancient art of Alchemy and Alchemy symbols have been around since ancient times. Alchemy has been claimed as a science by some, a branch of philosophy by others, and a pseudoscience by some.

Alchemy originated in the early centuries A.D. in Egypt, Greece, and Rome, and spread significantly to other countries by the 12th century.  The main goals of early Alchemists were to transmute metals, (specifically gold), create an elixir of eternal youth and health, and create the philosopher’s stone.

The Philosopher’s stone is a legendary substance said to be capable of transforming lead into gold and giving the user eternal life.  Alchemy symbols are symbols that represent various elements, exhibit associated properties and attributes, and are designed for specific purposes.  The elements these symbols are made up of are the same elements used within Astrology.

How are Alchemy Symbols connected with Astrology?

Early Alchemy drew most of its knowledge from Astrology.  Many alchemy element symbols are connected to planets or other celestial bodies.  These symbols were used until the 18th century until scientific advancements led to its decline in the 18th century.

Scientists believed many of the goals of alchemy were not possible.  Today, interesting segments of society still study and history, properties, meanings, the symbolism behind, and various uses for alchemy symbols.

The Four Classical Elements in Alchemy are the same four elements used in Astrology.  Some meanings and associations are similar, and some vary slightly.

Air – Air’s symbol in alchemy is an upward triangle bisected by a horizontal line.  Aristotle stated that the air element represented both heat and wetness.  He attributed the wetness to the water vapor present in the air.

The air symbol represents a life-giving force in alchemy. Hippocrates also associated air with blood.  The air element is associated with the colors white and blue.

Earth – Earth’s symbol in alchemy is the inverse of the air symbol.  It is a downward-point triangle bisected by a horizontal line.  Aristotle associated the earth element with coldness and dryness.  The earth element in alchemy can represent physical movements and sensations.  It is associated with the colors green and brown.

Fire – The fire symbol in alchemy is an upward-pointing triangle.  Aristotle attributed the fire element to hotness and dryness.  In alchemy, similar to astrology, the element of fire represents emotions such as passion, love, anger, and hate, which are often referred to as “fiery” emotions.

The fire element is represented by the colors red and orange.  In alchemy, fire is viewed as more masculine energy, which is also similar in classical astrology.

Water – The water symbol is alchemy is the inverse of the fire symbol.  It is a downward-point triangle.   Aristotle labeled water as cold and wet.  The water element in alchemy is associated with intuition, also like Astrology.

Metals and their Planetary Correspondences

The metals in alchemy correspond to planetary and celestial bodies within Astrology.  It was thought that each metal had a planetary ruler that affected the metal’s properties.  Along with its corresponding ruling planet, each metal also corresponds to a day of the week and a body organ.