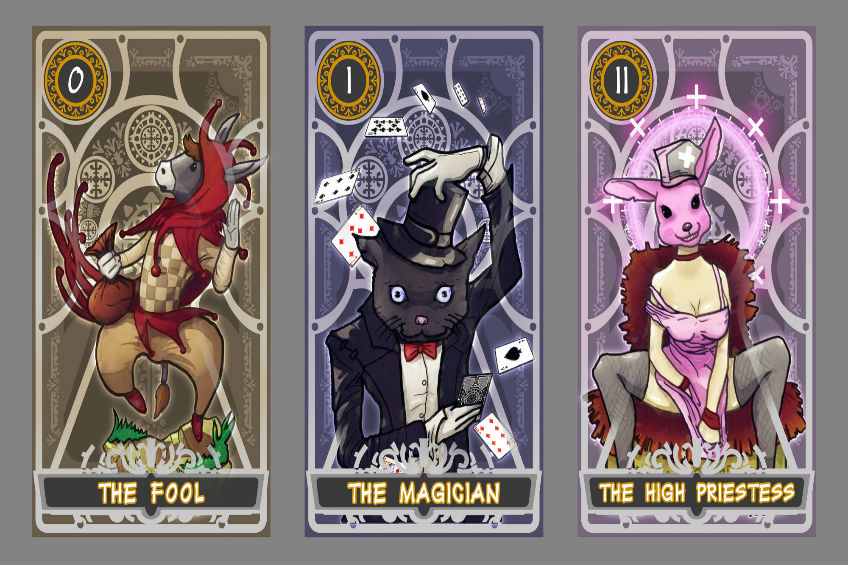 A Tarot Card deck consists of 78 cards. The cards are divided into two groups; the Major and Minor Arcanas.  All the cards are numbered, save for the court or royal cards in the minor arcana, so the use of numerology can very easily apply to reading and understanding of a card drawn.

Within the Tarot Card deck is The Major Arcana. 22 individual and unique cards numbered 0-21. The Archetypal big pictured cards of the Major Arcana correspond to pivotal important moments in a person’s life path. These cards depict, with their heavily symbolic characters, a person’s passage through a lifetime. From childhood innocence, adolescence, maturity’s trials, and tribulations, into enlightenment and wisdom.

Our focus here will be on the Numerology of Tarot Cards 0-The Fool,1-The Magician, and 2-The High Priestess of the Major Arcana.  Each card has a number usually printed on the card, and each number carries a specific meaning.

Tarot Cards and Numerology work perfectly harmoniously together once you understand how to add, subtract, combine and reduce their values and symbolism.

History of Numerology in Tarot Cards

Numbers have been manipulated since the dawn of humanity, into systems shared by others to predict the future; and even to understand the will of the Gods and Goddesses.

Pythagoras, in the 6th Century BCE is thought to be one of the first to assign specific attributes to each number. To begin with, even numbers are female, and odd numbers are male.

Henceforth, additional meanings were added to numbers contingent to your ethnic and religious heritage. For instance; what is held to be true of numbers in the East may not be true in the West. A Buddhist interpretation of a number may not be true for a Muslim, but the Christians might agree, and so on. So when reading the number’s meanings to follow, know that they are derived from a culmination of Christian and Pagan, Eastern and Western paradigm beliefs. There is no one interpretation that is all right or all wrong.

We start with the most perplexing number of all, zero. It is also the “Perfect Number”. “0” is a perfect balance in Eastern Paradigm. Is it the Beginning or the End? It is Harmony. Prior to Rider-Waite-Smith’s first printing of the Tarot in 1910, The Fool had no number, just like Death had no name.  In the Tarot, there is no definite end. One door may close, only to find a new beginning behind it. The number “0” is infinite, therefore represents infinity, endless possibilities. Just like what a Fool believes, it is a number based on one’s own faith in their imagination.

The number 1 in Numerology represents new beginnings, fresh ideas, youth and vitality, and new possibilities for change. The Magician is not stuck in the past, nor focused on endings, he speaks only of an end to the old ways and start of something new. The Magician is the card of Springtime, the start of a new year in many non-monotheistic cultures. Everything is possible with the number 1 in Numerology in this Tarot Card which represents Magic, which means it is all up to us to envision it.

The number 2 represents two faces of one reality. This reality extends to everything there is to be known. The High Priestess knows of all things in the known world and the unknown, above and below the surface, the seen and unseen; in other words both sides of everything. The High Priestess is the keeper of truth and speaks of duality and everything hidden. Achievements that are both wonderful and extremely challenging to accomplish, realize and understand. In Numerology of the number 2, look for balance after weighing possibilities, by looking for the potential and ramifications of both possible outcomes.

Aquarius in Relationships & in Bed

The Fire Signs in Astrology: Aries, Leo, and Sagittarius!