The Cosmos Thinks You Are Ready to Embrace Your True Essence...

From the Desk of:

I can’t believe you finally found your way here.

You see, I’m your biggest fan.

…and yes, I’ve always been there with you, on the days you weren’t sure if you could get out of bed to face the day…even if you didn’t realize it 🙂

So good to really, truly see you.

I’ve been waiting SO so long to talk with you in person!

But, enough about you 🙂

I should probably talk about ME for just a minute…since this might be a little confusing.

I am the Cosmos.

It’s a bit hard to get your head around, maybe, just meeting me like this…and to be honest, it’s not that easy introducing myself and “what I do” in a nutshell.

I’ve even done some of those workshops on “your elevator pitch” and all…like you know, who you are, what you specialize in, who you help, etc. etc…

But it STILL doesn’t help much with the introductions! Ha.

Soooo…the best thing I’ve been able to come up with, in these type of situations is my Wikipedia Entry (funny right)???

is the universe. Cosmos is used at times when the universe is regarded as a complex and orderly system or entity; the opposite of chaos.[1] The cosmos, and our understanding of the reasons for its existence and significance are studied in cosmology, which is a very broad term covering any scientific, religious, or philosophical contemplation of the cosmos and its nature, or reasons for existing 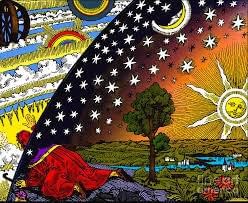 So, there you go.

I am the Universe…but in the sense that I try to find Order in a Sea of Chaos.

It’s not enough for me that everything (and everyone, including you)…simply EXISTS.

I think there’s more than that to it.

For now, let me introduce you to some very important people in my life (aside from you)…

You see, I’m not running this place and the Cosmic Operations Center all by myself. Far from it!

I need help…lots of help. Especially when it comes to practical things, like sending emails and staying in communication with you in a timely manner.

You can think of me kind of like a “Cosmic CEO” – who is really good at seeing the “big picture”…but an absolute disaster when it comes to remembering to tie my shoes (if I wore shoes. Which I don’t).

For example, say I were to find the Perfect Solution for you one day – whether that’s a glimpse of your future, or a bracelet that helps you stay aligned with your True Purpose, or a way for you to make money doing what you love…

It wouldn’t do for ME to try to send your Perfect Solution off by myself, as it might not reach you for a few thousand years (which is the blink of an eye for me).

So, that’s why I have a cast of “Cosmic Helpers” who all help me to stay in touch with YOU, and get you what you need (usually in the nick of time)!

Let me introduce you to three of them.

Secretary To The Cosmos Number One: Cindy from Cosmic Operations

Cindy is my “right-hand gal” when it comes to running the Cosmos. She makes sure that the Galaxies expand on time, and the Dark Matter stays where it should.

She also has a knack for finding Futures that have slipped out of alignment…and alerts me, so that I can help get them back on track.

So if you get an email from Cindy, be sure to open it right away!

Your future may be hanging in the balance.

Cindy is a Lightarian, which means she is super healthy and lives on Cosmic Light and Moon Bars. You’ll never see her ordering anything unhealthy from the Cosmic Cafeteria.

*However I have a sneaking suspicion she sometimes eats Andromeda Doughnuts at midnight. Don’t ask me how I know. I’m the Cosmos 😉

Secretary To The Cosmos Number One: Cindy from Cosmic Operations

Cindy is my “right-hand gal” when it comes to running the Cosmos. She makes sure that the Galaxies expand on time, and the Dark Matter stays where it should.

She also has a knack for finding Futures that have slipped out of alignment…and alerts me, so that I can help get them back on track.

So if you get an email from Cindy, be sure to open it right away!

Your future may be hanging in the balance.

Cindy is a Lightarian, which means she is super healthy and lives on Cosmic Light and Moon Bars. You’ll never see her ordering anything unhealthy from the Cosmic Cafeteria.

*However I have a sneaking suspicion she sometimes eats Andromeda Doughnuts at midnight. Don’t ask me how I know. I’m the Cosmos 😉

Secretary To The Cosmos Number Two: Daphne from Cosmic Design

Now Daphne, you must understand, WAS first assistant to the Cosmic Designer…but, due to a little mishap involving a star cluster that disappeared into a black hole a year or so ago, she’s been moved over to our new shop…

And she’s now the curator over at Cosmic Curations. I won’t say Daphne is scatterbrained. She’s actually very, very smart 🙂 BUT she does have a habit of getting a little too excited about things sometimes, and forgetting what she’s doing.

But that’s ok. We all LOVE her in her new position, where she is absolutely THE most fun person to go take a galactic shopping trip with you can imagine!

Oh, and Daphne has a weakness for those little Galactic Cocktails they serve about Two O’clock here every day at the Cosmic Cafeteria…so if she seems just a little bit too “bright” around Three, that’s why. But don’t worry. She’s even more fun to go shopping with then! 😉

Special Ambassadors From The Cosmos: Ric & Liz from Cosmic Vibes

Ric & Liz have been very special friends of mine for several years now, for two reasons.

First, we share a passion for finding unusual and effective tools for human beings to use to improve their lives and take control of their destinies.

In fact, I think we met (officially) while researching a Mayan Calendar that contains a secret code to your DNA down in Central America one year…it’s a little hard to remember now.

But I DO know that we all love to discover hidden, amazing ways to turn lives around…and we always share our secrets with one another as soon as we find them!

A lot of the tools for how to uncover your true essence and live your best life come from their research and connections.

And when I peek into their private lives, I often find Liz with her head stuck in a book trying to unravel the mysteries of The Cosmos (secret: she mutters a LOT when she’s having to figure out the complicated mathematical equations that make it all make sense).

Ric, for his part, also enjoys exploring “hidden” history, mystical sites and in general going deep down the “cosmic rabbit hole” to figure out how things really work…

But I happen to know he is also a die-hard Florida State University Football fan and most weekends from the end of August through the end of November he can be found yelling at people through the television ;-P

(No judgment here. I’ve been known to watch a football game or two from my “skybox” here in the clouds)!

They have 3 cats named Loki, Freya, and Apollo…and all 3 of them are quite secure in the fact that they ARE deities and Ric & Liz are merely their bumbling unreliable human butlers.

The second reason I consider Ric & Liz to be Very Good Friends is (shhhhh) kind of a selfish one:

They own the apparatus that allows me to send email from way out here to you Humans down there on Earth.

Without them, I would never be able to actually communicate with you (for one thing because I don’t have fingers. I’m an non-corporeal, conceptual being remember).

But it’s a secret, so please don’t tell just anyone, okay?

Remember how I said I would get back to embracing your true essence and WHY you’re here?

Ever since seeing your first moments here on Earth, I’ve been convinced that you were meant to do something special during your lifetime.

That’s why I took YOUR Life’s Book (it’s in the Human Beings section here in the Cosmic Library) and set it aside on one of the shelves in my private study.

I take your book out now and then, just to see where things are at…

And if I see that you’re veering off-course a bit, or seem unclear about what you should be doing in order to reach your Life’s Potential, I sit down and write a note off to you pronto.

And usually include some sort of tip or tool that will help you get back on course.

These things are timely matters…so, if you happen to see an email come through from me (The Cosmos, remember)…open it right away!

It will have something it’s very important for you to do…within a certain window of time.

I think that’s all for now.

Also, I think I see Cindy coming up the Cosmic Stairs with some sort of paper in her hand…I can always recognize the little “click click” her glass heels make on the steps…oh yes.

She needs something. And she doesn’t look happy! Oh dear. Well…

Nice chatting with you.

We will talk again soon!

P.S. Remember, I can’t send you emails myself. So they will be coming from Ric & Liz (who know how to do such things, bless their hearts).

Embrace Your True Essence and Connect with the Cosmos.....