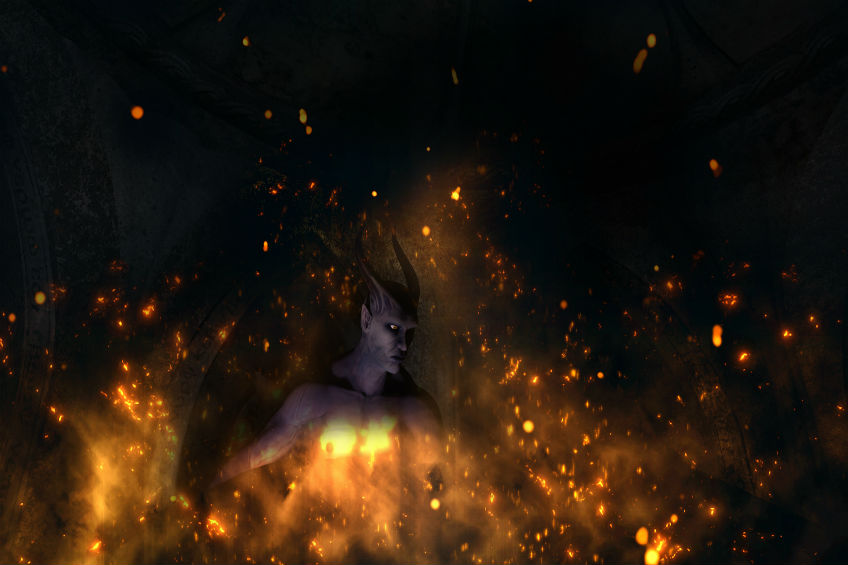 Was Lucifer Angel or Demon?  It’s a question we inevitably stumble upon when studying Angel Numerology.  When we think about Lucifer, the Forbidden Fruit, and hell, we don’t see him as a beautiful angel.  Portrayed with immense bat’s wings, he was the first villain to ever be referenced, yet his role is indispensable, for he balances God’s good and thus helps maintain the Universe in equilibrium.

Much is said, but little is known about the King of all Demons role.  For some, it’s difficult to believe that he was once God’s favorite winged soldier.  The darkest myths surrounding Satan always begin in the same place: Paradise. As a snake, he made it his mission to tempt Eve with the Forbidden Fruit of the tree of knowledge.

As an infiltrated spy in God’s kingdom, Lucifer Angel introduces chaos into Eden.  He’s partially guilty for Adam and Eve being ejected from the Garden of Eden.  Why would he do that? Well, here’s where the story turns even more interesting.  Lucifer Angel was jealous! For millennia, he was God’s most beautiful and loved Archangel.  As perfect as he was at the beginning of times, Lucifer Angel came to be God’s most formidable foe.

Lucifer: the most beautiful Angel

Fire, horns, and a trident, sharpened teeth, goat’s hooves, engulfed in infernal flames; this is how we imagine the Devil…  But Lucifer Angel wasn’t always that frightening or unattractive. According to Christian tradition, he fell from Heaven because he defied God and conducted a rebellion against Him. So, what was he rebelling against?

The tradition that depicts Lucifer Angel as a traitor also depicts him as one of history’s first sinners.  The first? That would be Lilith, Adam’s first wife. Lucifer Angel rebelled against God out of spite, jealousy, and pride.  He saw himself as being so beautiful, perfect, and loved before God, that Adam’s creation was too much for him to bear. He wanted to “open God’s eyes” and show Him who was the most powerful.

Some versions take a different route and argue that Lucifer Angel never rebelled, he’s just fulfilling his role as a punisher of the wicked.  According to this perspective, the wrongly named “fallen angel” is, in fact, anything but! He’s the most loyal out of all of God’s Archangels, as he has the vital mission of keeping the sinners and demons of his domain at bay.

In that sense, Lucifer angel wouldn’t be Satan, a traitor, or God’s enemy, as mentioned in the Old Testament.  Rather, Lucifer is God’s loyal servant. On the other hand, some may see him as the “Bringer of Light” or the “Morning Star,” in which case the light that these aliases refer to is the knowledge, or wisdom, granted to Eve through the when she bit the fruit.

My intention isn’t to trivialize a discussion of this level of importance within the Christian community.  On the contrary, my intention is to go deeper into the part that Lucifer played in history, be it as an Angel or as a demon.  His importance to the Universe’s equilibrium cannot be stressed enough because, as is expressed in Tarot readings and in Jungian psychology, he is an archetypical figure that is always present in every one of us.

Living with your shadow is the first step to accepting your humanity, and when you are able to look at the devil straight in the eyes, that’s when you’ll begin to heal.

Archangels in the Zoroastrian Worldview

Guardian Angels of the Zodiac Signs